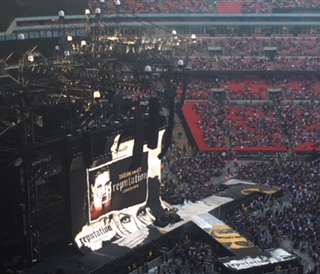 Thank you so much for returning back to my blog.

Today I am going to be writing a blog about Taylor Swift and her amazing reputation tour, which I was lucky enough to go to. To start, I am a massive fan of Taylor Swift and have been since I was a little girl. I loved how her songs were always based on her life. I really liked her music videos and her country songs too! My favourite song is probably ‘you belong with me’ but I also love ‘I know places’ which is from the album 1989. I have only seen Taylor once before, In Hyde Park (2015) where she performed her 1989 album. I really enjoyed it and since then I have been waiting impatiently to return to one of her concerts.

I went to ‘Reputation’ on Friday the 23rd of June with my parents and sisters at Wembley Stadium. We arrived at around 7:30 which meant we missed all of Charlie XCX but we still saw Camila Cabello. My favourite songs she performed were ‘Havana’ and ‘never be the same.’ Although we did miss Charlie XCX, she did come on stage to sing ‘shake it off’ with Camila Cabello and Taylor Swift.

THE SET-LIST FROM THE OFFICIAL PROGRAMME:

Additionally, the surprise guest was Niall Horan, from the old One direction band. He sang ‘slow hands’ with Taylor which I really enjoyed. A few songs which were in the program weren’t sung, such as ‘should’ve said no’ and ‘long live.’ (Or at least I don’t remember them being sung!) Instead Taylor sang ‘so it goes’ from the Reputation album.

The show is AMAZING! The stage design is set in a ‘T’ for Taylor and the lighting and dancing is incredible. You are given a wrist band which lights up at different points in each song, which looks unbelievable when you look around the stadium at everyone there. Moreover, Taylor brings on props such as snakes for the small stages. She also changes costumes several times and travels across the crowds to smaller stages by using a lit up lift. The screen on the main stage is superb! Even if you are right at the top of the stadium, you can see from the screen everything which happens. The stage design is incredible, the fireworks and the sounding are all excellent. It is probably her best tour yet with special exclusive sections where she even performs her own poem, displaying to the audience her talent of song-writing and her many skills.

I would really recommend it! I hope everyone who has already been or is going soon enjoys it. It is truly an amazing show which had everyone standing up for the whole 2 hours and 30 minutes. It could not be more entertaining! My favourite song of the set list was ‘I did something bad’ because although it is not one of my favourite songs, it had everyone standing up and singing along. Also, the flames of fire in the chorus were amazing! I also loved how Taylor engages with the audience. She says things about her songs and really keeps the audience interested. However, there was something Taylor said about how she was so grateful that we were all there watching the concert. She then said something about how there are so many better ways for us to be spending our Friday nights. But I have to disagree with her there. What could be better than listening to Taylor Swift play live in Wembley? I couldn’t see how my Friday night could be any better!

One thing I was a bit upset about, was the fact that some songs had only their choruses sung, such as my favourite song ‘you belong with me’ and a few others. This was the same for the last two songs which formed the grand ending to the whole show. Despite this, the show was not boring and continued to entertain everyone! Thank you for reading! Are you a fan of Taylor Swift? Or have you been to the Reputation tour? Comment in the comments box below! If you liked this blog then please share it on one of the social medias below! Additionally, you can also read my Reputation vs 1989, where I write about which album I prefer and why.

I love fashion, travelling and books! View all posts by bethlucyblogs